Island on Fire is an historical reimagining that is both fascinating and suspenseful!

It is the end of April 1902, and Emilie Dujon, the daughter of a coffee and cocoa planter on the island of Martinique, has her whole life planned out. She’s happily engaged to marry a successful sugar plantation owner, Lucien Montplaisir, and the wedding invitations have all been sent out. It is hoped the marriage will pump much-needed money into her family’s plantation, just in the nick of time. All in looking up for the Dujons until Mont Pelée, the long-dormant volcano looming nearby, begins to smoke and spew ash, rock, and sulfurous gases down over the region.

At this same time, an important and hotly contested election is underway in the closest city, Saint-Pierre, a beautiful port town known as ‘the Paris of the West Indies.’ The governor and his supporters are determined to get the voters to the polls and secure the status quo. But to do so, the populace must remain calm and remain in the city. To assuage their fears that Mount Pelée is about to erupt, he forms a scientific committee to travel to Pelée’s summit, study the conditions there, and return with their recommendations. What he actually wants is for the committee to back up his opinion that all is well.

On an evening at the theatre with Lucien, Emilie inadvertently discovers he is cheating on her. She had recently begun to doubt the wisdom of her engagement to him, and this only cements her desire to break the engagement. But when she approaches her parents with her decision, they will hear none of it. Her confrontation with Lucien only angers him and confirms that he means to take her family’s plantation for his own once they are wed.

When the scientific committee stops at the plantation seeking a guide up the mountain’s slope, she decides to get away from her troubles for a while and feed her curiosity about the wakening volcano by joining their party. One member of the committee is the newly-arrived French lieutenant, Denis Rémy. He and aide-de-camp lightheartedly pass the time as they travel up the mountain vying for Emilie’s attention. But when he saves her from a deadly snake, it is Rémy that earns her gratitude and admiration.

When the committee sees the volcano is likely to erupt at any moment, they rush back to confer with the governor. Despite their observations and warnings, he still maintains there is no imminent danger. As conditions worsen, the residents of the villages closest to the volcano’s blasts of heat, rock, and ash begin to pack Saint-Pierre’s streets.

Emilie’s situation grows even direr when Lucien discovers her having dinner with Rémy in a town restaurant, a discovery that ignites into a very public fight between the two men. Emilie, desperate to escape Lucien’s grasp, impulsively consults a powerful island herbalist, one known to be knowledgeable in the ways of voodoo. But once she’s indebted to the evil man, things really take a turn for the worse.

As the tremors, ash, and rock spewing from Mount Pelée increase, the governor locks the city down. He forbids anyone to leave and requires all public servants to remain at their posts as if nothing were wrong. With food becoming scarce and water despoiling, the city edges closer and closer to boiling over into mass panic and chaos.

ISLAND ON FIRE is a historical fiction novel based on the 1902 eruption of Martinique’s Mount Pelée, the most deadly volcanic eruption of the 20th century. The heat, ash, and flying debris destroyed the port city of Saint-Pierre and took the lives of approximately 30,000 individuals in only minutes. The story is a fascinating reimagining that is both suspenseful and absorbing. The romantic side plot of Emilie, Lucien, and Denis Rémy was well incorporated, well-told, and ultimately, very satisfying. The voodoo subplot was thrilling and horrifying; I couldn’t stop reading. By the end, I was thoroughly entertained, had learned a lot about Martinique’s history, culture, and geography, and found myself checking out travel options to the interesting island. I recommend ISLAND ON FIRE to readers of historical fiction, those interested in tales set in the West Indies, and armchair travelers to the French Antilles.

I voluntarily reviewed this after receiving a copy of the work from the author through France Book Tours. 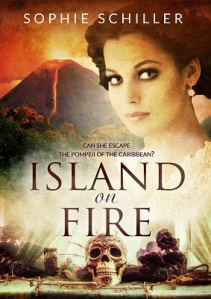 In the lush, tropical world of Martinique where slavery is a distant memory and voodoo holds sway, Emilie Dujon discovers that her fiancé, a rich sugar planter, is unfaithful. Desperate to leave him, she elicits the aid of a voodoo witch doctor and is lured into a shadowy world of black magic and extortion. When the volcano known as Mount Pelée begins to rumble and spew ash, she joins a scientific committee sent to investigate the crater. During the journey she meets Lt. Denis Rémy, an army officer with a mysterious past with whom she forms an unlikely attachment.
During the journey, the committee discovers that Mount Pelée is on the verge of eruption. When they try to warn the governor, he orders them to bury the evidence for fear of upsetting the upcoming election. As the pressure builds, a deadly mudslide inundates Emilie’s plantation and she disappears. Lt. Rémy deserts his post and sets off on a desperate quest to rescue Emilie. But with all roads blocked, can the lovers escape the doomed city of St. Pierre before it’s too late?

Sophie Schiller was born in Paterson, NJ and grew up in the West Indies. She loves stories that carry the reader back in time to exotic and far-flung locations. Kirkus Reviews called her “an accomplished thriller and historical adventure writer”. Her novel, Island on Fire, is a historical novel about the worst volcanic disaster of the 20th century, the eruption of Mount Pelee on Martinique. She was educated at American University, Washington, DC and lives in Brooklyn, NY. To find our more, please visit her website, and follow her on Facebook and Twitter
***
You can enter the global giveaway here or on any other book blog participating in this tour. Visit/Follow the participating blogs on Facebook/Twitter, as listed in the entry form below, and win more entry points!

Tweeting about the giveaway everyday of the Tour will give you 5 extra entries each time! [just follow the directions on the entry-form] Global giveaway open to US residents 1 winner will receive a print copy of this book

CLICK ON THE BANNER TO READ REVIEWS AND AN EXCERPT